Before we start, head over to Christine Miserandino’s piece from which the “spoon theory” has stemmed. It’s a brilliant piece, and the depth of understanding about what it is to have a disability that she managed to convey with her explanation is wonderful. 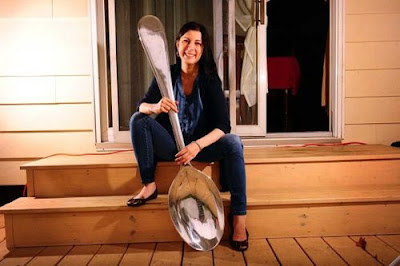 When I first started reading feminist blogs it wasn’t long before I started hearing about “spoons”
“I haven’t got the spoons”
“Urgh, I’m getting low on spoons”
“Anyone got the spoons to help me out with this jerk?”
And so-on.
I ended up asking a feminist friend to find out WTF people were talking about, because when you Google “spoon theory” you are more likely to read about the “silver spoon” sort of thing.
The overwhelming understanding in feminist circles appears to be that we only have limited resources to deal with our daily battles, whether they are personal, professional, or online. At times when there are heated debates on topics which may trigger us, those resources get depleted at a higher rate than usual.
Christine’s writing equated resources with spoons in relation to her Lupus, and the fact that those who live with Lupus have a constant struggle to maintain their lives while their condition deteriorates.
When people on the feminist blogs talk about “not having enough spoons” it may mean that they feel like they can’t deal with whatever it is that has been happening, do not have the energy to continue to debate, or just cannot find it in themselves to explain for what feels like the millionth time a concept to someone who may or may not actually want to learn.
Sometimes it is used among friends to ask for help. i.e. “I’m running out of spoons – can you come help deal with this troll?”
Sometimes to display distain at someone asking stupid questions, or repeating the same points. i.e. “I really don’t have the spoons to deal with you anymore.”

What is important to realise is that the Spoons concept was driven by someone with a long term debilitating illness. It is much loved by squillions of people who also struggle with limited spoons.
Go to twitter and use the hash tag #spoonies and you will find a reel of men and women all trying to cope with a myriad of disabilities daily and nightly. Their spoons are so much more valued than mine, just simply because I have more to start with, and do (usually) not have to truly economise with them.
It is for this reason that I don’t use the term “spoons”, because I feel like it isn’t really mine to use. I like the phrase, and I sure as hell think that it is relevant to everyone at some point in time, but it just feels a little like I’m undermining the original meaning now that I am in the fullness of health.

Tea-spoons is another phrasing that is less commonly used (as I have noticed), and the origions of this seem to be Florynce Kennedy. Check out the lovely Melissa McEwan over at Shakesville who uses the term regularly.

Just by nobody doing nothing the old bullshit mountain just grows and grows. Chocolate-covered, of course. We must take our little teaspoons and get to work. We can't wait for shovels."

I hope that this helps out people looking to find out what the heck is being talked about on the blogs when someone refers to “spoons”. Let's grab our tea-spoons and start shoveling hey?

Below I have included what spoons mean to other people, because there seems to be a slightly wider range than just what I thought.

“spoons” is just such a nice, succinct way of expressing “a finite, slowly-renewable resource I have to consciously think about allocating.”


I think it isn’t just good for understanding Lupus, but anyone dealing with any disability or illness.


Maya of “capitalism bad”
“Something that you might like to be aware of is that the person who wrote it, and others who have similar health issues (she has Lupus) are very critical of the way that it has been used much more broadly than originally intended...
There is an argument that the wide adoption of the metaphor for the lives of people under very different circumstances is a form of appropriation."


@Rageaholic_
I always thought it referred to having the patience to spoon-feed information in small and easily digestible chunks. But I think that was an assumption or I made it up-recently read the spoon-theory some1 linked to on THM & it's very different.
I should've made it "patience, time & ability" I realise it's more than just about getting frustrated with newbies sometimes.


1. We, the community of people with invisible chronic illnesses, need a terminology that describes just our experiences to use amongst each other and with the outside world.
2. That terminology, so far, is mostly The Spoon Theory.
3. The spoon theory has been great in getting the message across that our pain and fatigue and other symptoms make our daily lives very different from people who don't have invisible chronic illnesses.
4. People have taken the terminology and run with it.
5. This is great when it's being used to describe the experiences of people with invisible chronic illnesses.
6. This is problematic when it gets used for other things.
7. PLEASE STOP USING THE SPOON THEORY TO TALK ABOUT THINGS THAT AREN'T ABOUT BEING CHRONICALLY ILL.
8. Thank you.


@GraveyDice
I think of #spoons as an inverse of harmful culture, which is created by millions of small actions, each on their own trivial but collectively add up to something monstrous. #Spoons is the neutralizing of harmful culture in the same way - in tiny steps.
And the great benefit of #spoons is that the big problem is too big to comprehend fully, or to try to address. Whereas #spoons allows us to deal with small actions, one isn't overwhelmed by the enormity of the problem.


@TSpankhead
there's this, though it doesn't add anything. :)

@MeganWegan
Can't find the post, but short answer: pick the fights that are worth winning, and self-care is really important. No point trying to be any kind of activist if you're too tired for the fight.


Deborah.
There's another spoon concept, of using a teaspoon to empty an ocean, of misogyny usually. A huge and impossible task for one person, but little bit by little bit, as feminists from all over the world work on a issue, each wielding a teaspoon, the ocean is lowered.

NB: I have found Christine Miserandino very approachable and there may well be a response from her updated to this page in the next few days... fingers and toes crossed :)
Posted by Scuba Nurse at 6:53 PM