jux•ta•po•si•tion / [juhk-stuh-puh-zish-uh n]
noun
an act or instance of placing close together or side by side, especially for comparison or contrast.

Some people will say “ahhh I have heard this rant before”. Some people may be on the “huh?” side of things.

When I read the first twilight book I had shudders. I read the entire series because A) they were easy to read, and B) I wanted to see exactly how dysfunctional things got.
If twi-hards read my blog, at this point I’m sure you are thinking “What the HELL!! This is TRUE LOVE, look what they GO THROUGH TO BE TOGETHER!!!” (More than three exclamation marks to a fan is as glitter to the vamps)

Actually, true love means doing the best for your partner. In the example of the twilight characters it would be him never talking to her and walking the hell away, since at their age difference it is essentially paedophilia.

Having been in an abusive relationship I know exactly how romantic it is.
The massive ups and downs. Having them tell you that they are sorry, it is just that they love you SO MUCH. After I broke up with him it advanced to more fully fledged stalking, and abuse. Even then there were 17 year olds cooing about how romantic he was. WTF is romantic about someone following you, or sitting outside your house and just watching?

Seeing as 12 years hasnt improved anyone's comprehension of romance vs dysfunction, I am going to lay out the stark facts. These thanks to the Sophie Elliot Foundation (I found her case terrifyingly close to home).

Early signs of abuse in relationships

Power and control
Is obsessive. Tells you who you can see, what clothes to wear, how to have your hair or makeup. Often says, “If you love me you will …”

Possessiveness
Wants to know where you going, who you are with, when you will be home, and so on. Displays stalking behaviours such as following you, accusing you of being unfaithful, flirting, and so on.

Threats
Is abusive to you, or about your family, friends or pets. Indulges in name calling, and physical and emotional threats. Says things like, “I will leave you if …”, “I will hurt you if ….”. Nasty behaviour towards pets is a frequent early warning sign.

Suicide threats
Says things like:
“I need you.”
“You’re the only one who understands me.”
“I don’t know what I would do without you.”
“If you leave me I will hurt myself.”
“I need help; please help me.”

Changeable/volatile behaviour
Is erratic – nice one minute or day, and abusive and nasty the next. Blames you for his behaviour. “You make me react that way”, “if you did this, or didn’t do that I wouldn’t get so angry.” You feel like you are walking on egg shells and constantly “trying to make him happy.”

Sexual
Is coercive, pressuring you to do things you don’t want to. Takes no responsibility for contraception, seeing it as “your problem”.

Physical abuse
Says he loves you but then physically abuses you, by hitting, punching, choking, or pushing. Often has a history of previous abuse.

Communication
Is haphazard and unreliable. Leaves you to do the contacting and keeps you dangling. You are left confused and don’t know what he wants. Doesn’t appear to be telling you the truth about what he is doing and says “it’s none of your business”. Makes you feel crazy, or jealous, or insecure when that is not how you usually feel.

So with the above in mind, have a go at the quiz below… and let me know if you still think Edward should be held up as the ultimate boyfriend. 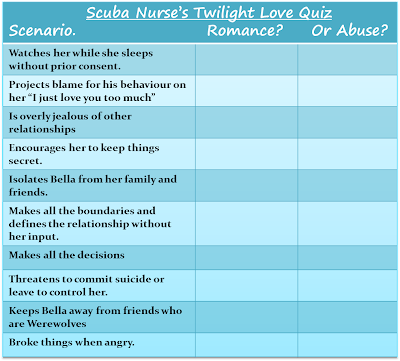 Some Facts about Abusive Relationships thanks to Living without violence NZ, and other references.

One woman is killed by her partner or ex-partner in New Zealand every four weeks. Approximately half of all homicides in New Zealand are family violence related.

One in three New Zealand women experience physical and/or sexual abuse at the hands of a partner during their lifetime.

In any one year, one woman in five will experience physical and/or sexual abuse at the hands of a partner.

15-24 year olds are the age group most at risk of physical, psychological and sexual victimisation from current and ex-partners. (New Zealand National Survey of Crime Victims, 2006)

One in five New Zealand men are subjected to violence by their partners.

One woman dies approximately every 26 days at the hand of her partner or former partner. We estimate that over 20 women have been murdered since Sophie in 2008. (Roundtable for Violence Against Women)

93 out of every 100 domestic violence cases in New Zealand are male assault female.

In 2009, nearly 75% of the 29 female murder victims were killed by offenders identified as a family member or partner. (Police Statistics on Culpable deaths in New Zealand, April 2010)

About 10 children are killed every year in New Zealand by a member or members of their own family.

The annual cost of family violence in New Zealand is at least $1.2 billion.

37% of protection order applications and 25% of respondents are under 29 years old. (Family Court Statistics, 2007)

Family violence is a major problem in New Zealand but by reaching out for help all of us can begin to change the cycle of abuse and violence.

48 per cent of couples at age 21 years old reported having been involved in physical partner violence. (Dunedin Longitudinal Study, Moffitt and Caspi, 1999)


NB: Please note that the above stats and info relating to “Male” to “female” violence is due to the current white ribbon campaign. Abuse can occur in the reverse and cisgender men and women are not the only identity included within this data.
Posted by Scuba Nurse at 10:48 PM