We booked a group of over 30 people to see Chicago by ATC on the strength of "Lucy Lawless is in it" and "Michael Hurst is directing", and to be honest I didnt worry too much beyond that.
It’s not often you go to an Auckland show and see a Shortland street actorSHHHH LET ME FINISH! See a Shortland Street actor AND take half the show to recognise who they are. Amanda Billings played the role of Roxy Hart, and was unrecognisable as her Sarah Potts. She blew my mind within her first number, with the assistance of the talented and physically phenomenal Mike Edward. As well as executing her part in the opening song fabulously, she and mike progressively stripped down to their underwear, and gave us a mesmerising perspective of Roxy’s affair and murder through a stunningly choreographed acrobatic dance sequence. I was left wishing she could kill mike again so I could see more, and lo and behold the rest of the cast was happy to fulfil my wish.
The cell block tango had been transformed from the Fosse choreography I am so fond of to something that had me clutching the railing and wishing it would never finish. Each of the girls stepped up and took the stage, building upon the work of the previous actor and repeatedly “killed” Mike in a myriad of acrobatic ways. The scene left him stripped to his underpants and swinging unconscious by his feet above the stage. A veritable human piñata. And  would you believe all this was unbelievably witty?

I had been warned it wasn’t the Chicago I was familiar with but at this point I sat up and took notice.


There were several levels of bravery to this production. It’s a fosse musical, and to be honest I wasn’t 100% enthused about the concept of a fosse without any bloody fosse, but I was willing to be convinced, and boy am I glad I risked it. They stripped back the choreography, the costumes, the set and the usual devices.
It turns out that once you have done that, what is left is a script and score ACHING to be used in a more subversive way, in a more intimate setting, and choreography that asks more of the performers as individuals. It was the difference between Hugh Grant and Alan Rickman reading a book on tape.  You *think* Hugh Grant is as good as it gets, but when you hear Alan Rickman, you realise there is a lot more out there than just shiny and entertaining.


In all seriousness, it’s Lucy Lawless, the blow up dolls, sexy costuming and smut that is making the media, but this show was sexy in so many less tangible ways. Mostly talent. Talent is incredibly arousing, and from the lighting in the ceiling to the painted stage, and all the skills used in-between, this show was pure talent. It wasn’t the hilarious blow up dolls or nipple covers that were titillating. It was the raw energy and power of the acrobatics, the dance, and the obvious love of music. I think the bit that made MY knees go weak was watching the audience respond to the almost constant eye contact, interaction and brilliant off side action from the ensemble. If anyone in that audience missed out on a smile, a filthy wink, a nod, a side eye, a prop, or just feeling like they were immersed, I will be very surprised. The cast were practically in the front row’s lap, and I suspect from about 15 minutes in the audiance members would have happily let them sit there.


Congratulations to the team and especially to Michael Hurst for his direction, Shona McCullagh for choreography that made strangers gasp in unison, John Gibson and the band for the music  that made me want to give the origional score a second chance at love, and those brave enough to let these decisions happen in an arts community as small as Auckland. I assume the sold out shows and extended season reflect that this show has been a financial success, and I hope it inspires more people to walk to the edge of comfortable and look beyond the usual.
Posted by Scuba Nurse at 4:28 PM 2 comments:

How could this happen? - T/W

T/W - Discusses rape, victim blaming, and the Roast Busters case.
How could this happen?


I’ve heard so many people in the last week ask “how could this happen?” “How could this go on for so long?”, “why don’t the girls come forward?” when talking about the news about the repulsive predatory behaviour of a group of young men.
Tragically, they usually answer the question themselves, and in a bitter aftertaste, most don’t even recognise thatthey are the answer.


The next step in the lunch room conversation is to speculate about the victims of sexual crime, and “young people today”. What women are wearing, where they are going, who they are choosing to hang out with.
Why is the next logical step in breaking down the cause of a crime to look at the victim? Why not the assailant?
Why not our culture, which allows young men to feel so entitled to sex that there is a socially acceptable term for a friendship with a WOMAN WHO WONT HAVE SEX WITH YOU. (Friend zone). Like having a friend is some kind of hardship.


What is wrong with us?I sort of understand. If we can find some “otherness” about victims, then we can fib to ourselves, and be reassured that if we are not like them, we will not be hurt.
If we jump over cracks, and turn the light switch on and off, cover our knees, and do not wear high heels we will somehow be immune to the Bad Man, who is some mythical boogie monster.


We need to turn 180 degrees, stop investigating the victims like there is some kind of magic thing that makes them a good target, and start looking at why we have young men with repeat predatory behaviour by the time they hit their teens.
Why do men rape is an incredibly complex question, but why do they CONTINUE?


Because they can.
Because the victims are put on trial too.
Because being unable to say no is STILL being treated like the equivalent of yes.
Because people still truly believe that rapists are the bad man in the darkest corner of our public parks or night club.
Because when someone is attacked, we avert our eyes from the normal looking rapist, and speculate on what makes a victim.
Because the victim’s reputation is under attack in the media and their community as much as the perpetrator.


We should be asking what makes a rapist.


If your response to these stories was any question about the nature of the victims YOU are part of what makes attackers stronger, more confident, and more likely to re-offend.


That's how this can happen.
Posted by Scuba Nurse at 10:49 AM No comments:

The Baying Mob or How I carry a torch.

So, you are horrified by the “Roast Busters”, and want to make a difference, but what can you do?

In my more frustrated moments, I would love to be that person carrying a torch at the front of a baying mob, crying for justice and making a difference to the outcome of a trial of people who have hurt someone else.
But we don’t live in a village of 100 people. These young men are not the only people out there perpetrating sex crimes. And we HAVE a justice system. It is flawed, but we need to use it so the flaws are SEEN, and changed, and our system can evolve with our understanding of right and wrong. An example of this is that rape used to be legal within marriage, and the laws evolved for the better with our societal changes.
We can’t nor should we, start a mob of people, so here are some ideas for how you can be brave, and carry your torch out into the community and really make a difference.

Be the light at the end of the tunnel.
Volunteer. Work on help lines. Or just be a strong and vocal voice for justice so that people see you as a safe refuge or support when they need it. Advocate for friends who need a voice. Speak for those still too traumatised to speak. Hold your friend’s hand when they decide they are brave enough to speak up, or pursue justice.

Be the voice of reality.
This issue is raising the topic of “what could possibly make young men behave this way.”
Remind people that 1 in 4 women are raped. This act is not a rarity and we live in a rape culture.

It is raising the question of “how to avoid being a victim”
Remind people that: most victims know their rapist.
That most rapes occur in thevictim, or rapist’s home.
That the rapist drinking is of more importance than the victim as far as causation.

Be the person brave enough to discuss “consent”.
People are often confused about what rape is. We need to start talking about the fact that rape isn’t what the media tells us.
Its subtle, it’s discreet, it is friends, it is family. It is quiet, it is dangerous, and it is under reported.
You can inform them that in research when men are asked if they have “raped” most will say no. But when men are asked if they have “forced a woman who was not your wife or girlfriend at the time to have sex,” or if they had ever “had sex with a woman who was too drunk or drugged to indicate whether she wanted it.”
That answer changes significantly.*

This image from the USA is incredibly depressing, and NZ is no better off. 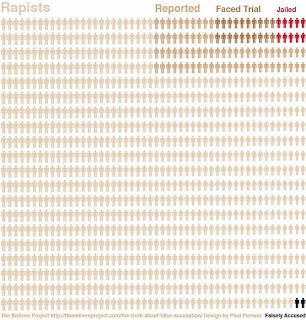 Be the killjoy.
Be the person at your work, or social gatherings who when someone makes a rape joke, you look blankly at them and ask why it’s funny. If they have to explain it, it becomes apparent very quickly the rape culture we are living in.

Be the support person.
Be the person who listens without judgement, believes the person talking about abuse, and helps them with WHATEVER THEY CHOOSE TO DO.

Be the person advocating body autonomy for the children and young people around you.
Ask before you hug or kiss friends, family or other people you greet.
When kids don’t want to give you a kiss or hug hello or goodbye, say “that’s ok, kisses and hugs are special and we can ALWAYS choose when to give them.” Empower young people to understand that touch is a choice, and their bodies are their own to control.

Be the person supporting those on the front line.
Donate, remind those around you to donate, and when there are competitions for funding, support organisations who help.


Not everyone can carry every torch and they are ALL important. Support the other torch bearers. Carry someone else’s for a while to lighten their load.  Accept that we will all need to take a break sometimes.
But as long as we are casting light in our own communities, that will spread, and other people will find the strength to start standing with us.

My love to everyone on the front lines.

*These quotes are from the WHO study, and are therefore gendered in this way.
Posted by Scuba Nurse at 10:01 PM 1 comment: