Doing the wrongest thing for the right reasons.

Several times in my career I have had to do things to a patient so cruel that I was physically ill afterwards. Both times they were lifesaving measures. Something that made the difference between life and death, and something they had no memory of later.

At the time though, they experienced it, fought it, and lived that horrible moment.
But they lived, with good outcomes. They and their family were grateful for the care we gave and the interventions that were used.
I still occasionally have nightmares about one of them.
In my day-to-day practice I hold a person’s hand and talk soothingly to them until they are unconscious, whereupon I make a remarkable transition from a kind hearted person to looking at the patient to a nurse seeing them as a puzzle needing to be solved. Intubation tube in. Catheterisation done. Patient positioned as required for surgery. Dislocate the hip for better access. Suction. Diathermy. Sutures.
We do awful things to people
Awful.
Well documented, fully researched, best practice, global standards of awfulness.
It’s not until I am at the pub and make a flippant comment related to “burning the patient” and have to explain that it was deliberate and totally ok, that I realise how truly messed up what we do is.
Actually, what we do isn’t messed up, it’s how we get our heads around it that is messed up. Everyone varies in how they cope. But I PROMISE that if you know and love a nurse, that they disassociate in some way, in order to do what needs to be done on a daily basis. The alternative is the disturbing concept that they are ok with doing what they do to a person that they get to know.
So next time you ask someone who cares about you to look at you like a patient, and diagnose or help you Please don’t get upset if their face goes oddly blank, and they give their answers in a way that doesn’t seem entirely like them. And do not get cranky with us because we are unsympathetic. You are asking us to do our job. To look at your body as a just a sum of its parts, a puzzle to be solved, a problem to be fixed. We can’t CARE how it feels. We can empathise, but not sympathise.
It’s an important differentiation.
They are looking at you like a patient, because if we cared when we had to do what we do, it would rip us to tiny pieces every day. 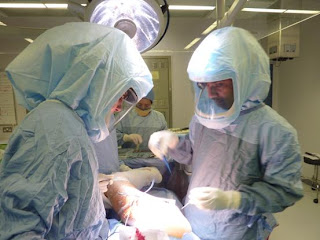 Posted by Scuba Nurse at 4:35 PM 2 comments: Links to this post