Miriam Grossman, and her bizarre take on sex education were the reason I was shaking with rage as I walked into work this morning. I was listening to the car radio and a woman was being interviewed about NZ sex education. Firstly, she had an American accent and kept referencing US websites that our Family planning isn’t affiliated with.
If you are going to take interviews in another country, at least do some damn research lady.
Secondly, every second “fact” that came out of her mouth, wasn’t.
For example “it is proven that Oral sex is linked to mouth cancer”
Uh no it’s not…
Saying that oral sex causes oral cancer is like saying that typing causes stomach ulcers.
Typing on a contaminated computer causes the transmission of the germs that in turn could cause stomach ulcers. There are other ways to cause stomach bug transmission, and the bacteria vector is not to blame. The bacteria, and following body dysfunction itself is.
Kissing babies doesn’t cause cancer – the politicos can breathe easy.

So who was this idiot and why was she being interviewed?
Within a few minutes I had found out that Family first had invited a certain Dr. Miriam Grossman to speak at their “Forum on the family”. 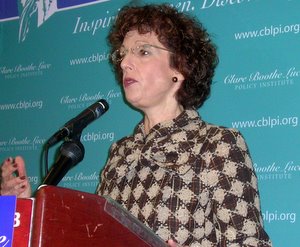 Ooohhhh I thought, that makes sense.
But hold on a minute… what kind of stupid doctor would be pushing such misinformation?
She is a clinical psychiatrist, promoting her new book about sex ed and youth sexuality called “you’re teaching my child what?” A quick zip through on amazon showed me that several of her research assistants are pathologically right wing, and NOT MEDICALLY TRAINED.
One is a journalist: Ashley Herzog.
Her qualifications in medicine? None.
Her qualifications in politics and gender? A charming little piece about “Wenergate” blaming the women who were harassed, for gagging for it.
Not much more I want to say on her.

So I thought, who is supporting this woman?
(Mum taught me to look at people who support concepts and decide if I wanted to be like them or not as part of my decision making)
Well Family first for a start *cough*.
Also she appears to be the conservative US media darling for all things sex related.

People I love dearly do NOT support her.  Such as GayNZ.
After seeing theGayNZ.com website write up- I started digging a little deeper into her anti human rights themes.

So I had a bit of a look at her take on homosexuality and gender…
For a start – take a peek at the following video. the California Senate Judiciary Committee voted to advance the FAIR Education Act (SB 48), a bill that would require state schools incorporate into their curriculum the contributions of LGBT Americans to development of California and the U.S, The good “Doctor” spoke AGAINST the legislation, mostly on the fact that transgenderism would frighten the children.

Yuck.
“It is our responsibility to protect children as best we can from exposure to facts and experiences that they are not equipped to handle… If this bill, SB 48 passes, I fear for the children of this state. More harm will come from this bill than good. Certainly, we can teach children the importance of respect and tolerance in a manner that is consistent with child development and biological truths.”
FFS… really?   Most children raised in a supportive home with decent sex and gender education understand more clearly than some adults that the “biological truth” is that sexuality, gender, biological physicality and identity are individual assignments and should not be a package deal.

Within the book she doesn’t tone it down all that much. In her references there is the following link to the website “mass resistance” it has the title “another reason not to send your kids to UMass Amherst"I would love to think that she just wanted a copy of the wonderful flyer, but if that were the case, she could have gotten it without using a hate group’s website to get there.
This is the flyer if you want to avoid going to a shitty site... 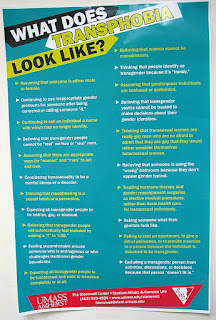 Another footnote that caught my eye was the following

“One notes how often the term “transgender folks” is used to get us to believe they are people just like you and I – they just want to be castrated, that’s all.”

What the actual FUCK??
There is nothing to rebut here because it is simply her very sick opinion that a group of people are not actually people. Surprising since as an orthodox Jewish person, that particular technique of fucktardery got a horrific number of her religious group killed in the second world war.

She also links to “Parents and Friends of Ex-Gays” where the following greeting is given.
“Welcome to PFOX
PFOX is not a therapeutic or counseling organization. PFOX supports families, advocates for the ex-gay community, and educates the public on sexual orientation. Each year thousands of men, women and teens with unwanted same-sex attractions make the personal decision to leave homosexuality. However, there are those who refuse to respect that decision. Consequently, formerly gay persons are reviled simply because they dare to exist! Without PFOX, ex-gays would have no voice in a hostile environment.”
If there was any shred of professional integrity left, the use of this link would have burnt it and stomped out the ashes.

That this woman is peddling hate speech under her professional title and selling books is of huge concern to me. Surely there should be a disclaimer.

I firmly believe that freedom of speech is an important part of any healthy society. Integrity of professions is also very important, and I think it is about time the Doctor was investigated for unprofessional behaviour. Using her title and qualifications to convince people they are unnatural and unhealthy for having real, natural sexual urges, is cruel, dangerous and irresponsible.
Someone needs to at least complain to her governing medical body.

A big thank you to Rachel Hansen, and Richard Hills for their wonderful work with Sexuality education in NZ, and their great, positive interviews on last night’s close up show featuring Grossman.
A standing ovation to Katie Fitzpatrick who managed to be interviewed in debate with Grossman, without ONCE rolling her eyes, banging her forehead on the table or simply punching the good doctor. You are a hero to us all.

Just to finish off the fun, here are some quotes from Miriam Grossman that I actually filed under “stupid” in my writing page as I worked.

“unless you are a girl who is exclusively with other girls in which case the risk of STD’s is very low and HIV virtually impossible.”

Uh noooo, that is wrong. Blood to blood contact is required for HIV contraction and there is no reason why a woman couldn’t have that kind of contact with another woman.

Referencing twilight’s Edward as the ideal man (because conservatism is hip!)

“Not bad, huh? Now if only the professionals running our country’s sex education could figure that out. Because that’s what the Twilight craze is about: a guy who adores his girl so much, he’ll do anything to protect her. A guy who won’t allow his girl to get hurt, even if it means saying “no” to himself. That’s what girls want.”

Has she read Twilight? I refer you to my post here discussing the issues around abusive relationships in twilight – but I guess its ok since they didn’t have sex.

“With the brouhaha over Bristol Palin’s pregnancy, here’s a plus no one’s considered: should this young woman go to college as a married mom, she’ll be spared four years of the campus hook-up culture.”

Yup, because once you have pushed something out, nothing goes back up there… darned if I know how people have more than one child.

Referenced in this blog post and NOT recommended by ScubaNurse, or indeed any nurse with half a brain.
Ref: Miriam Grossman: You're Teaching My Child What? A Physician Exposes the Lies of Sex Education and How They Harm Your Child: Washington: Regnery Publishing: 2009.

I know a bunch of people have written about close up interview - can you please link to your posts in the comments? Thanks!