Equality, the final frontier. Where no man has gone before?

I came out of the latest Star trek film feeling angry, and let down.
In a film set in a future that is supposed to be pretty damn idealistic (great tech, multicultural/multi-planetary teams, etc.) this film was behind the times NOW.
This film just felt like one big "Male Gaze" to the point where at times I felt physically pushed out of the moment of enjoying a story by the horrible realisation this film wasn’t made for people like me (that's 50% of the population BY THE WAY film industry). The concept of a film so overtly made by men for men is problematic for several reasons, sexual objectification being one, but my beef is that women have ZERO independent character development; they are defined solely by their relation to the male characters. Meanwhile male characters are given development both within their romance and out of it.
Urgh, it turns out that it is not space that is the final unexplored frontier, it is equality.
First up, in a meeting of senior leaders –out of all the entire table of a variety of species discussing plans, 5 women (mixed races and alien). A few characters are overtly alien. There are Eleven white humanoid men.
Really? In the future, we STILL don’t have gender equality, or racial diversity? REALLY?
Uhura has always been a favourite of mine, and I was looking forward to seeing her in this film. Unfortunately she only had one token scene that didn’t revolve around her holding up the concept of Spock's humanity. She bravely negotiated in perfect Klingon, and appealed to the enemy’s' sense of honour to try and save her team. it didn’t work, but it was a neat moment of one of the team showing their true colours and value. Pity it was the only interesting thing she got to do.
The first scene to make me realise that this movie was NOT going to make me happy, was the arrival of Carol Marcus. A young female member of the team is introduced to her new captain (and obviously, boss) – Kirk. On her arrival to the ship Kirk overtly eyes her up and down, makes a loaded comment about how he is happy she is on board, and proceeds to hit on her for the duration of the film.
So just to reiterate, a man who is responsible for hundreds of lives in a workplace people have to LIVE at, he feels confident enough in his own power, and consequently, her lack of power, to sexually harass her within minutes of being introduced.
When I mentioned this to people the overwhelming, and disappointing response was that the action was in character with Kirk, who is to be honest, a bit of a knob. He is endearingly reckless, thoughtless, and laddish. That’s what “makes” the film.
Talk about missing the point.
Star trek is set in the future. The future where I hope fervently the idea that workplace harassment and the idea that any leader has the right to treat a staff member like they are there for their enjoyment is ALSO not ok. JUST as silly as the idea of a man "owning" a woman.
We don’t just stop having creeps in this world, the entire culture around what those jerks are allowed to do to other people changes. This is evidenced by all human rights changes ever.
In the future, all will be equal, right? Star trek was the first show to have a woman of African descent in a non –menial role*. It is SUPPOSED to take strides and be forward thinking – the 1968 episode "Plato's Stepchildren" Uhura and Kirk kiss. The episode is popularly cited as the first example of a scripted inter-racial kiss on United States television.
This show is supposed to be thoughtful, provocative, and philosophical.
I’m well aware that the show has been problematic before now, and will continue to need to improve, but to see that NO progress has been made in this latest film, is as much of a kick in the guts as finding this out was…
“I was trying to make a movie, not tryingto make a Trek movie." – JJ Abrams 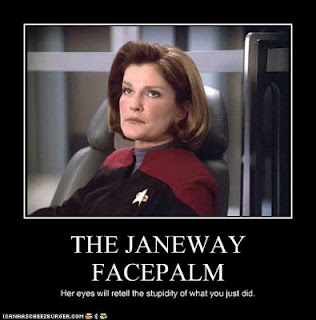 *how the actress herself was treated is more problematic – Nichols was the only performer in the cast who wasn't originally offered a contract, but instead worked on a week-to-week basis.

Posted by Scuba Nurse at 4:00 PM No comments:

Angelina Jolie, cancer, and why you might have privilege too...

I got severely shitty with the large number of “check your privilege” tweets on twitter today about Angelina Jolie’s news that she had opted for preventative bilateral total mastectomies due to her genetic risk for breast cancer. My reasons for being so grumpy went deeper than 140 characters could explain, so I kept my mouth shut and waited until I got home to write this.
The fundamental issue I had is that there is only one reason to have a preventative mastectomy, and that is to avoid a condition that could KILL you. So if you are worried about anything other than survival, when you read about Angelina Jolie’s choice, Check YOUR privilege.
YES, that’s right. If you didn’t get a cold fucking chill down the back of your neck, and that little voice in your head saying “I know why she did that”. CHECK YOUR FUCKING PRIVILEGE.

I’m not saying that you haven’t had to think about death, dying, or risk to your life.
In fact, most people, by the time they hit 50 have probably had some form of lump or bump, or scary moment that has meant they have sat down and written a will, and thought about their life-span and how long it may be.

But MOST of us had those moments thrust upon us.
I didn’t go out looking for trouble. It came to me.
My friend didn’t expect to find a fatal cancer, it was caught by her lovely GP.
My Uncle didn’t expect to start having seizures for no reason – but he did.
And THEN, and only then, did we start to take action to do with our own mortality.

It takes courage to look death in the face and make sensible choices. To take steps to decide to fight. Perhaps even to stop fighting, and make the decision to turn and face it and make the most of time remaining.
It takes bravery.
It also takes time, and support and endless cups of tea and good people.
A lot of people don’t look.
They avoid check-ups.
They skip prostate exams.
They delay mammograms.
They don’t visit the doctor, because “everyone has blood in their poop sometimes.”*
They make excuses, they look the other way. They avoid the issue.

Because this shit is HARD people.

And this woman didn’t just deal with something when it came to her, she anticipated it, sought out the hard truth about her mother’s death and faced her own mortality. Took some MASSIVE steps to avoid a bad outcome in the future, and has reduced her risk.
But this took courage, and the insight that her body wasn’t in her control. That her genetic code could eventually turn against her.
A real understanding that she could die.

And that’s not a privilege, that’s life. But I think you missed the point if you are worried about who paid.

*they don’t. Always check with your doc if your poop has changed or you notice blood.
Posted by Scuba Nurse at 10:26 PM 3 comments: