Tits and Teeth, or why perverts have a lower IQ. 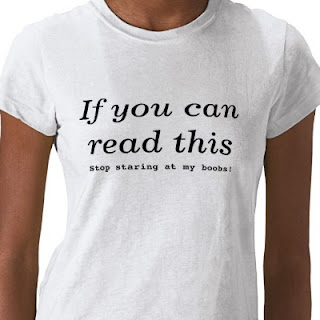 There is a saying in show biz...
“Tits and Teeth ladies!”
Translation? Don’t forget to smile and stand straight.
For a very cheerful person with an 14 E-cup rack like me it’s not something I have to consciously try for, and quite often something I get judged on without even realising it has happened.
Hunting for work clothes involves keeping eyes open at all times for items that cover without looking like I’m wearing a mumu. If I do find something both flattering, that fits, and that covers the girls I buy two or more in different colours.
As long as I look tidy, and shoulders, cleavage and legs are covered I'm happy.

Last week I was away at a work conference.
There was a black tie gala night where I knew there would be a parade of wealthy women in designer outfits, and there was an expectation of high level dress.
I tried on every dress in NZ (or so it felt) and even tried making one in a bit of a last minute rush.
Eventually I grabbed a basic dress which I planned to wear a top under because the bust portion just didn’t provide enough coverage.
While in Melbourne I found a dress in my size just like I was hoping for. Black fabric with a hint of shine and a heavy weight to support a curvier figure it ended at just above the knee and was a V neck with wide straps. With a bust reducing bra, it was just within the boundary of sexy but not inappropriate.

I was going to include a photo here but honestly, having spent the night being “slut shamed” I cringe at every picture of me, and feel that typical kick of adrenaline and taste of vomit in my mouth.

The dress was supposed to be worn with a bust reducing bra which accidentally got left in Melbourne in my hotel room.

So I put on the most appropriate bra I could find and looked in HORROR at my image in the mirror.

I looked lovely.
Knock out lovely.

Attract too much attention lovely.

This neck line would have been frumpy on a C-cup but on an E my bust was under pressure and so formed two globes (not in season this year ladies – far better to have empty drooping bosoms with bony clavicle between.)
So the dress wasn’t low cut, but it sure did show off the area.

I gave myself a pep talk in the mirror about it being no worse than a strapless dress on a skinny girl. I reminded myself that there would be plenty of stunning necklines and I wouldn’t be the only one and even measured the distance between my nipple edge and the neckline above it to reassuring myself that the fabric came right up to a good height (12cm/5 inches to be precise).

I held my head high and walked out the door.
Within 3 minutes of arriving (after saying hello to my boss but before getting a drink) a male co-worker who works not only in a different office but a different country was posing in a hilarious fashion for photos staring at my tits.

Gosh that’s so funny. Nothing quite like having to laugh at some ass-hat’s idea of a joke, when you are actually feeling harassed.
I jokingly posed for another picture holding his head straight in front and laughed to diffuse what felt like one of the more awkward moments in my life.
After that it was comment, after comment, after comment.

“Great cleavage”
“Nice to know you can party with the best of them”
“WOW”
“You are letting your hair down.”
“Your tits are AMAZING.”And of course the visual jokes, ogling, pretending to motorboat etc.
A few of the women made comments – none ‘bitchy’ to give them a bit of credit.
“Great assets”
“I wish I had cleavage like that”
“Holy cow, you are going to have all the attention tonight”

The thing was, I stayed sober, was behaving myself and didn’t know half these people.

The country manager bless her; looked me up and down and said “That dress is gorgeous – I’d ask where you got it, but I wouldn’t look half as good on me”.
Flattering; but not about one specific part of my body.

I spent the night wishing I had a shrug or shawl, and eventually went and cut it up on the dance floor with the girls, rather than sitting and waiting for the next (what felt like) attack.

What amazed me was that another woman wore a dress that was literally down to her navel – one of those glamorous ones that have a split between the breasts.
Not one comment.
NOT ONE!
Other than the fact that her dress had less overall coverage the only main difference was that she was almost entirely flat chested.

So I wore something not hugely different to anyone else but because of my bust size (which I can't choose) I spent the night feeling like it was my fault if I attracted men like flies.
They couldn’t possibly help themselves from being creepy – they were “right there”.

Interestingly enough the most brilliant men and women in the room, the ones in the top of the company were pleasantness in itself and held long and interesting conversations without once mentioning or staring at my breasts.

It seems susceptibility to creepiness is linked with a low IQ.

If I was giving myself advice I would be yelling about the behaviour of my colleagues and giving me big hugs.
But from this perspective I just felt ashamed and embarrassed.

In fact, I still do.